Back on the 28 Sep 2015 (Monday) morning, a friend in Taipei messaged me that he is afraid he might not be able to fly back to Singapore due to an incoming typhoon. It’s a huge one. There are already airlines cancelling their flights and he is worried about it. I briefly checked through his screen capture and it seems the airlines that reported cancellation is mainly China Airlines.

I went to Taoyuan International Airport website to take a look at the flight departure information. There are 283 flights departing from Taoyuan between 9am to 9pm and at first glance there seems to be a number of planes cancelling their flights. The information available to the public is below. My friend is taking the Tigerair Singapore flight departing at 2.30pm. 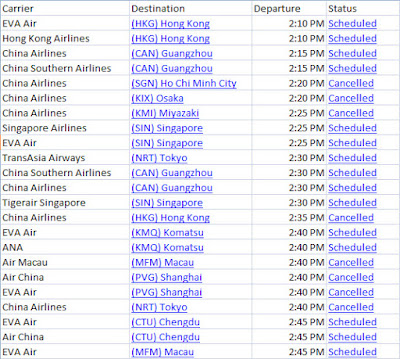 There are 4 pieces of data available here. There’s the airline company, destination, time and status of flight as of 9am. This is a good opportunity to utilize Six Sigma analysis to gauge the confidence the flight will take off or the flight will be cancelled.

I turn on my minitab and put the data into minitab for hypothesis testing.

The first hypothesis I put forward are China/Taiwan-based airlines will have their flights cancelled. As can be seen from the analysis below. The hypothesis is validated with Air China, Cathay Pacific, China Airlines, China Eastern, China Southern, Mandarin Airlines and Eva Air cancelling their flights. 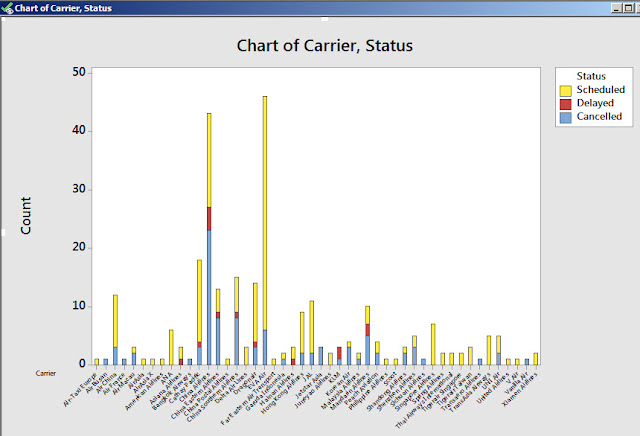 The second hypothesis I put forward is flight cancellation will take place during the evening as the typhoon will have landed at 12pm at the eastern part of Taiwan but the storm will not have hit Taoyuan airport yet. With this hypothesis, the below analysis is plotted. The point where most cancellation will come in is from 5pm. This validated the second hypothesis that most flights will be cancelled from 5pm. 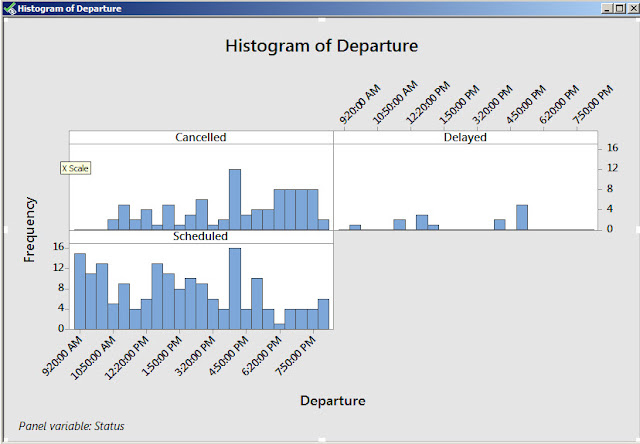 I shared with him the analysis and told him there’s a 90% chance the flight will not be cancelled. I told him to have fun and just go to the airport at 12.30pm (with some buffer for heavy traffic). The flight will depart at 2.30pm.

He arrived back in Singapore safely, albeit with some turbulence in mid-air. And enjoyed the morning instead of worrying about flight cancellation.

All in One Phone – Cashless and Cardless Day